Category
Robotica
Duration
00:02:16
Hits
1036
Rating
0 0
Description
Google's Boston Dynamics unveils smaller, lighter robotic dog named Spot. Full Story: Boston Dynamics, a subsidiary of Google, has unveiled a new robot dog named Spot on YouTube that is going as viral as its quadraped forebearers. The four-legged robot runs on an electric motor that powers a series of hydraulic actuators - the motors responsible for controlling the movement of a mechanical system. Spot can be seen walking indoors, walking through various outdoor terrains, climbing stairs and running. The video also shows Spot being kicked, presumably to demonstrate its use of a sensor that helps it navigate and walk. Spot weighs approximately 160 lbs. Spot is the leanest and most agile in a long line of canine robots from Boston Dynamics. Earlier iterations were larger and developed to carry heavy loads; Spot has been built for search and rescue or scouting. Boston Dynamics, which is based in Waltham, Massachusetts, was purchased by Google for an undisclosed amount in December 2013. Boston Dynamics has gained an international reputation for machines that walk with an uncanny sense of balance, run at cheetah-like speeds faster than the fastest humans and jump 30 feet. The company has also designed mobile research robots for the U.S. Department of Defense. For more news and videos visit ☛ http://ntd.tv Follow us on Twitter ☛ http://twitter.com/NTDTelevision Add us on Facebook ☛ http://on.fb.me/s5KV2C
Related 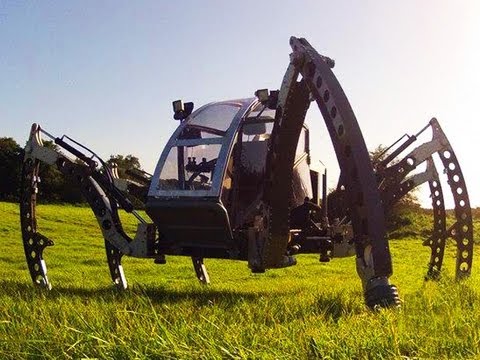